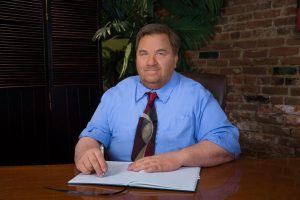 Although the title of this blog post might seem ridiculous at first blush, I’m personally surprised that businesses who invite customers upon their land for products or services have not tried to sneak “waivers of liability” into receipts…yet.  And, as you can see from my photo above, I spend a lot more time at McDonald’s than I do at a local gym.  Keep reading…you’ll see why that’s important below in our 3-part series on Exculpatory Clauses under Indiana law.

First, let’s examine Indiana law with regard to whether individuals can “waive” or “forfeit” the right to sue a landowner for accidents that occur on that property that injure others.  These waivers are called “exculpatory clauses” under Indiana law and under certain circumstances, Indiana courts have ruled “yes,” exculpatory clauses are valid in contracts.

The most common “waiver to sue” (exculpatory clause) occurs when a person signs a lease to rent a property to live or to run a business.  Often, the lease will contain waivers to sue the landlord in the event of an injury that occurs on the property.  Other times, a waiver is inserted into other contracts where a person uses the land of another – like a member of a health club, gym, country club or sports activity participant.  In both circumstances, Indiana courts have held that exculpatory clauses are not void as against public policy.

That doesn’t quite seem fair, does it?  The idea that a landowner who charges money for rent or services can also be immune from liability if he/she forgets to plow snow or has weight machines that are not inspected or maintained just doesn’t sit right with most people.

The Indiana courts consider both parties to be at “arms-length” when negotiating the deal in the first place.  And if the person who wants to rent the land or use the gymnasium finds the exculpatory clause to be a deal-breaker, well that person should be allowed to move onto the next property or find another landlord who does not include the waiver of the right to sue for negligence if the tenant/member is hurt on that property.  The general idea is that Indiana courts recognize each party’s freedom to contract and will not impose arbitrary unwritten restrictions upon the property owner.

Let’s examine the gym membership example again.  Oftentimes it is required that a person sign a “membership agreement” before being able to use Planet Fitness, for example, or their local health club, and the person who wants to use a gymnasium or other athletic area must be willing to execute an agreement before using the facilities in exchange for membership rights.

If that same person is then injured when a stack of weights falls upon him/her and breaks a leg, then Indiana courts might rule the member willingly gave up his/her right to bring a lawsuit seeking compensation for damages caused by the health club’s negligence and Indiana law recognizes this right as it is not against public policy to allow such contractual agreements.

This doesn’t quite seem fair, does it?  (I just recently had a similar case argued before a Judge here in northern Indiana in a dismissal sought by a health club).

What’s an injured person to do?  Well, first, of course is to hire Shaw Law to fight the dismissal.

Because, here at Shaw Law, we are aware that Indiana law does not entirely ignore the injured party in these situations.  We know and argue that Indiana Courts require strict adherence to the way in which the lease/membership contract is written before a party can be assumed to have waived the right to sue.

In fact, some defense attorneys bemoan the Courts require “magic language” before siding with the landowner in these situations.

What exactly is the “magic language” required in Indiana for exculpatory clauses to be valid?

We will examine the required language in Part 2 of our series on Exculpatory Clauses next time.